Hampta Pass Trek is a corridor in the Himalayas, between the Chandra Valley in Lahaul and the Kullu valley of Himachal Pradesh, India. The pass is named after Hampta Village, below Sethan village. Lower Himalayan shepherds use the pass in summer for its high-altitude grasslands in the summer, when the desert of Lahaul is barren. The pass includes vertical rock walls, waterfalls, hanging glaciers, pinewoods, rhododendron forests, open meadows, and small lakes, as well as 6000-meter tall peaks. The trek also includes glaciers and fast-flowing rivers, making it challenging but doable for some beginners.

Hampta Pass is a moderate level trek and is preferred by both beginners as well as experienced trekkers. The maximum altitude attained gained during the Hampta pass trek is 4,200 m.

Hampta Pass is a Monsoon Trek and is best done between mid-June to mid-October. There are chances to witness snow on the high passes in the early days of the season and then it melts down completely by August.

The temperature in Hampta Pass Trek daytime is pleasant between 10 to 15 degrees and at night it goes down up to -5 degrees.

Total Hampta Pass trek duration is 5 days including a road journey from Manali.

Accommodation and Meals on the Trek:

Meals start from day 1  dinner to Day 5 breakfast. On Day 5 early departure after breakfast. During the trek, you will be provided healthy hot meals which include breakfast, lunch, evening tea and snacks, hot soup, and dinner with daily different desserts. Hot drinking water will be provided daily at the campsite.

How to Reach Manali:

The best way to reach Hampta Pass from Delhi is via Manali. Reaching from New Delhi to Manali is probably the easiest part of the whole trip. The distance between Delhi and Manali is around 550 km.

There is no direct train to Manali. From Delhi, you can either take a Shatabdi train to Chandigarh or a train to Pathankot and then hire a cab or take a bus to Manali.

Fly to Bhuntar. Located 52 km away from Manali, it is the nearest airport to Manali. There are many private and Indian Airlines flights to Bhuntar that operate regularly. From Bhuntar, you can either take a cab or a direct bus to Manali. Altitude:- 10,100ft to 12,000ft
8.5Km, 6hr trek from Chika to Balu Ka Ghera
Moderate trek today
Packed lunch will be given
Water sources are available throughout the trek
Have your dinner and rest in the camps at Balu ka Ghera. Altitude:- 11,900ft to 14,100ft (Hampta Pass) to 12,900ft (Shea Goru)
Start your day with a steep ascend till the Pass
7 km trek takes around 10hr
No water point on the way (Depends on the snow condition)
Packed lunch will be given
1 hour of easy walk from the Pass to the campsite
Shea Goru campsite is the coldest place on the trek
Stay in tent Altitude:- 12,900ft to 13,950ft (Chandratal) to Chatru (11,000ft)
7Km trek which takes around 5hr
Easy trail and decend to Chatru
water sources on the way
Hot lunch at Chatru
Drive to Chandratal and back to the campsite (depends on road and weather conditions)
Have your dinner and spend overnight at Chatru in tents 85km drive which takes around 4-6 hours.
Breakfast at Chatru campsite
Lunch on the way (not included in the package)
Reach Manali around 2 pm. Driving time may increase due to heavy traffic
Plan your stay accordingly after reaching Manali

Hampta, Manali, Himachal Pradesh
The average walking distance is 7- 8 km each day and trekkers complete it in 5-7 hrs. Please refer to the trek itinerary for more details.
Vegetarian food will be served throughout the trek. Breakfast varies from bread and butter, semia, poha and cornflakes etc. Lunch mainly comprises roti or puri with sabzi. Dinner is complete with Dal, rice, roti and dessert. A dry ration of biscuits and toffees will be provided as well. You may carry nuts and dry fruits if necessary.
Our campsites are pitched near water sources. For your day’s trek, two litres of water should be enough. You will find water sources on the trek to refill your water bottles. Your trek leader will brief you about these before starting the day’s trek.
During the trek, toilet tents will be set up along each campsite. A toilet tent will have a deep pit, where one can answer nature’s call. There will be a mound of soil and a shovel to cover it up. These are dry toilets, where you’ll have to use toilet paper. This is the most hygienic and convenient way to answer nature’s call in the wild. Please use plain toilet paper and refrain from using wet wipes since these are not biodegradable.
Hampta Pass is a 5-day trek. Stay on all days of the trek will be in tents. Each tent will be shared on a double/triple sharing basis among the trekkers. Toilet tents will be set up for the convenience of trekkers. If you are a family of 3 members and want to stay in one tent then yes it is possible, in that case, we will provide you with 4 men tent.
Yes, you will be provided with tents and high-altitude sleeping bags that can withstand temperatures as low as -10 ºC.
If it starts raining while you’re trekking, we will continue on the trail as planned. Your poncho should protect you from the rain. Carry a backpack cover for extra protection from rain for your belongings.
Alcohol is dangerous in extreme cold, especially at high altitudes. Contrary to what people believe, alcohol does not make you warmer. Instead, it opens your pores, making your body colder. Moreover, it dehydrates you very quickly. Hence consumption of alcohol is absolutely prohibited on all Nomad Adventures treks. Anyone found with alcohol is quickly removed from the trek. Smoking, similarly, is not allowed on Nomad Adventures treks.
No, female Trekkers will share a room/tent with female co-trekkers and the same applies to others. There is separate accommodation for males and females.
Tata Sumo/ Bolero/Max kind of vehicles we arrange and accommodate 6-7 People in a vehicle
No, but in case you are having so please consult your doctor because there are lots of MYTH about Diamox.
All high-altitude treks come with their share of risks. We pay utmost importance to the safety of trekkers. While we do our bit to ensure a trekker is safe, we also expect any trekker who is enrolling with us to know what could go wrong, and if it does, how to tackle it.
Hampta-Pass is best done between June to October.
Yes, there will be snow on the Hampta pass trek in the pre-monsoon season.

Please visit the 'Things to Carry' tab to check the essentials required for the trek.
No, but there are shops on the base camp from where you can rent shoes, jackets and trek poles, headlights etc.
Hampta Pass Trek temperature varies from a maximum of 28-degree Celcius to 5 degrees Celcius during the trekking months of June to October. Please carry all your essential layers as mentioned in 'Things to carry' because it gets really chilly at night.
You don’t need special snowshoes. A good waterproof trekking shoe is sufficient for the trek. When there is snow, we provide micro spikes and gaiters.
The minimum age limit is 8 years. However, minors aged between 8 to 17 should be accompanied by their parents or guardians. The maximum age is 70 but please follow the fitness regime before coming on the trek.
Hampta pass trek is graded as a moderate level trek but requires trekkers to be physically fit. The minimum age eligibility is 8 years. As a parent or guardian, if you feel that your child can adapt to the conditions of the mountains and would be able to walk every day as required, then indeed, yes!. It is recommended to maintain good physical stamina before coming on the trek.
It is advisable to reach Manali by 10:00 am on Day 1. Nomad Adventures pick up is lined up at that time. From there, 2-hour drive from Manali, then a 2 km trek from Jobra to Chika.
Beginners can attempt this trek provided they stick to the fitness schedule and meet the health requirements. As in all treks, physical preparation is mandatory.
The mobile connections are available till en route to Jobra on Day 1. There will be no mobile reception after this point.
Nomad Adventures team consist of a qualified Trek leader, guide, porters and a cook who will be with you throughout the trek.
You can spend time exploring tourist attractions around Manali like visiting old Manali, Hadimba temple, Manu temples, Vashist hot water springs, Jogini waterfall and Rohtang valley. Please note that these are suggestions and Nomad Adventures does not make any arrangements for visiting them.
All high-altitude treks come with their share of risks. We pay utmost importance to the safety of trekkers. While we do our bit to ensure a trekker is safe, we also expect any trekker who is enrolling with us to know what could go wrong, and if it does, how to tackle it.
Since you won't be returning to the same point of the trek hence you need to carry all your luggage.
Minimum 6 people and the maximum 26 we take in one batch. We need a minimum of 6 people to run a fixed departure but for the customized trip group size doesn’t matter.
If you want to offload your rucksack, you will have to inform us in advance so that the necessary arrangements are made. You will be charged per day for offloading your rucksack.
Carry Adhar ID proof, medical certificate and Covid vaccine certificate.
Himalayan treks require trekking shoes which are not only comfortable but should have a good grip and should be waterproof. As you might encounter rain on the trek so it is very important to have sturdy shoes which can handle rain. If you have sports shoes then make sure it is waterproof, have a good grip and are not slippery. 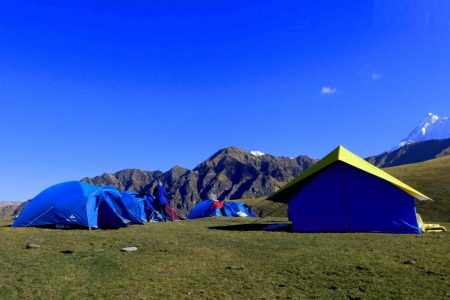 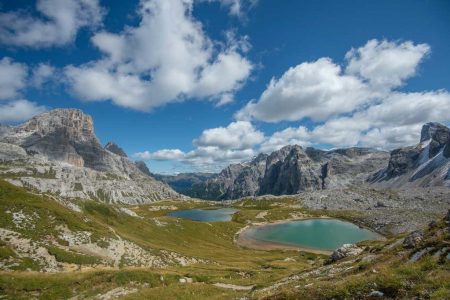